Story Behind the Ring - Melissa & Darrel

I met Darrel the summer of 2009.  He was from a rural community near Owen Sound, two hours north of Toronto, and I was from a small logging community in northern British Columbia. We met in the middle while working in Edmonton, Alberta, and shared our first kiss on Canada Day. After 6 ½ years, he popped the question, and there was never a doubt in my mind this was the man I wanted to spend the rest of my life with. 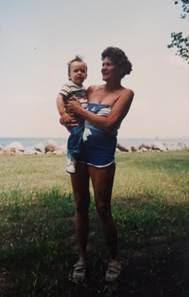 Darrel grew up on the shores of Georgian Bay, spending much of his time at his grandmother Violet’s house, known to all as “Gram”. Surrounded by crystal clear waters and never-ending woodlands, it was the perfect place for a little boy to grow up hunting, fishing, and wood crafting with his dad.

Gram and her husband, known as Con, were married December 17, 1955. Con served as a member of the Royal Canadian Mounted Police, and acted as security detail for some of Canada’s most important dignitaries including Prime Minister Trudeau. His untimely death in 1988 was a devastating shock to the family. Gram spent the next 17 years at the shore without Con.

Her unique property is right on the water, at the end of a long dirt road, which was unable to be completely plowed during the snowy Ontario winter months. Her only option was to snowmobile out for her grocery shops and family visits, and she continued to do this well into her 70s.

Darrel, being the closest grandson, would often snowmobile or quad down to Gram’s property to help her cut wood for the stove, bake, swim in the harbor and spend his childhood surrounded by water and wildlife. They were, and are, two peas in a pod. Darrel was inspired by Gram’s strength and determination to live at the shore while offering her 11 grandchildren an oasis in which to play and grow.

I wanted to incorporate Gram’s property in Darrel’s wedding band. With the help of his dad Greg, we sent Johan a piece of wood that was used in the original structure of Gram’s house (shown below), and they turned it into the perfect wedding band for Darrel. In the years that I’ve known Gram, when people joke about finding a man to keep her company or to travel with, she replies simply that she already married the love of her life, that no one could possibly compare. Con was her one true love, and she remains dedicated to him to this day. Gram is the best example of true, everlasting love. So we asked her to perform the ceremony. She married us on the beaches of Cayo Guillermo, Cuba, on April 22, 2016. The entire team at Jewelry by Johan was amazing. The entire process was seamless, and the finished product is simply beautiful. I couldn’t have asked for a better outcome, and their customer service far exceeded my expectation for a team that I never actually met in person. They treated my request with nothing but a “can-do” attitude, accepting product all the way from Canada and treating it with the delicacy that I had hoped for. I would highly recommend Jewelry by Johan to anyone looking for a unique or custom ring.